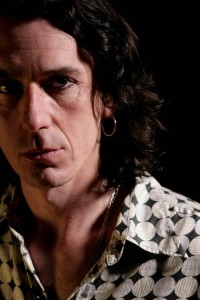 Peter Murphy is a writer, spoken word performer, musician and journalist. His first novel John the Revelator was published in the UK and Ireland by Faber & Faber and in the US by Houghton Mifflin Harcourt in 2009, was shortlisted for the Kerry Group Fiction Prize in May 09, and longlisted for The Guardian’s Not The Booker Prize.

Of the novel, Roddy Doyle said, “Everything about John the Revelator excited me—I couldn’t wait to turn the page and keep on going. It was like reading for the first time, almost as if I’d never read a novel before.” Colm Toibin commented, “an absolutely wonderful book… fresh and so contemporary, original and disturbing and brave.” James Dean Bradfield of the Manic Street Preachers described it as, “Full of things I can remember but can’t imagine, a stunning debut novel.”

Shortly before the book’s publication, Murphy, together with the host of musicians who make up the Revelator Orchestra, began work on the spoken word/music album adaptation The Sounds of John the Revelator. Preview selections from the album are streamed at www.myspace.com/therevelatororchestra. A leaked copy of the album generated the following review from Jambands.com:

“Imagine, if you can, music that sounds like Tom Waits on drums and Lightnin’ Hopkins on a battered hollowbody thumping away down in the cellar while Murphy reads. (The) Sounds of John the Revelator is a neat piece of work that somehow combines the weirdness of Poe with the coolness of the Beats over a soundtrack that might’ve been created by the Velvet Underground … if they’d had Irish accents.”

Peter Murphy was born in November, 1968, in the town of Enniscorthy, Co. Wexford, in the south-east of Ireland, one of five children born to Peadar, a post office clerk and champion amateur boxer, and Betty, a telephonist. At the age of 17, he won the EU sponsored Michael Sweetman Award for Young Writers, taught himself to play drums, and over the next nine years toured and recorded with bands such as The Tulips and Grasshopper, sharing stages with The Cramps and Public Enemy.

Murphy moved to Dublin in 1991 and established himself as one of the country’s most prominent arts writers, interviewing hundreds of musicians, writers, film makers, war correspondents, human rights campaigners, and even the odd South African president in his capacity as contributing editor for Dublin’s Hot Press magazine.

“Imagine, if you can, music that sounds like Tom Waits on drums and Lightnin’ Hopkins on a battered hollowbody thumping away down in the cellar while Murphy reads.

In 2002, Murphy signed with the Marianne Gunn O’Connor Literary agency and spent the next five years working on his debut novel. He was invited to contribute liner notes to the remastered edition of the Anthology of American Folk Music, and has also supplied sleevenotes for Garbage and Killdozer, as well as contributing to Rolling Stone, Music Week, the Irish Times and the Sunday Business Post, among others.

Murphy has been a regular panelist on RTE’s arts review show The View since 2001. He has given talks on the influence of Joyce on Irish music, (‘Nocturnal Emissions’, at the 2004 ReJoyce symposium in the National College of Ireland) and the connection between Irish literature and punk rock (‘The Sick Bag of Cu Chulainn’, the Edge Festival Ballina, 2008), and has also appeared the Dublin Writer’s Festival, Listowel Writer’s Week, the Belfast Book Festival, the Kilkenny Arts Festival and the Flatlake.

In May 2008, after 17 years in Dublin, he returned to Enniscorthy, where he now lives. He is currently at work on another novel.