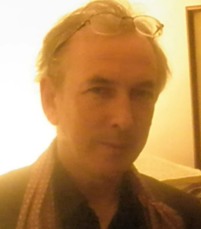 I started school in St. Canice’s at the age of seven. My future comrade Dermot Bolger sat in the next door classroom, though it would be 10 years before we were formally introduced. Our classrooms looked out at St. Canice’s Church. On my way home after school, I used to stop and sit in the back of the Church, reading the pamphlets of the Catholic Truth Society, rehearsing new sins to tell the priest in Confession. I was particularly interested in the Lives of the Saints.

And then one day he wrote out a poem on the board: ‘A Vision of Connaught in the 13th Century’, by James Clarence Mangan. My ears were already pricked up at the strange sonorities.

I liked my new teacher, Mr O Shaughnessy. He was cool, even though he was from Limerick. He wore desert boots and checked sports jackets and drove a brown Ford Capri. He was enthusiastic about poetry and would painstakingly write out poems on the blackboard in coloured chalks, which we would then have to learn by heart.

We learned poems by Kavanagh, ‘In Memory of My Father’, ‘In Memory of my Mother’, and Colum’s ‘The Old Woman Of The Roads’ , and I enjoyed them. And then one day he wrote out a poem on the board: ‘A Vision of Connaught in the 13th Century’, by James Clarence Mangan. My ears were already pricked up at the strange sonorities. And then he wrote out the first stanza:

I walked entranced
Through a land of Morn;
The sun, with wondrous excess of light,
Shone down and glanced
Over seas of corn
And lustrous gardens aleft and right.
Even in the clime
Of resplendent Spain,
Beams no such sun upon such a land;
But it was the time,
‘Twas in the reign,
Of Cáhal Mór of the Wine-red Hand.

I can still remember, as I can remember hardly anything else in my life, the almost sexual thrill those words occasioned. Sexual in the sense of something which lived in the spiritual realm being experienced through the senses. In particular, it was the phrase ‘wondrous excess of light’, I wanted to rush out of the room and walk up and down the empty daytime streets repeating the words to myself, for the pure pleasure of it. Why did they have that charge for me? I liked the hot s sounds, but there was more to it. The phrase ‘wondrous excess of light’ evoked a visual image in my mind. I could see that light. And yet, I knew it was a light that could not be expressed in the same way in a picture or photograph, nor could it be found in the natural light of day. The light lived in the sounds. The excitement this magic of language evoked in me would never be equalled. It was a physical thing, on my tongue, tingling in my blood, sizzling in the ears, and it was also something which lived elsewhere in the gap between sound and meaning, between word and image. I knew then, though I know it is impossible to have known this, that I would spend the rest of my life exploring that gap, padding through the olive groves of Catalonia and chasing it along the frozen canals of Amsterdam, sensing it in the silences of Paul Celan and the angelic choruses of Rilke. But most of all in myself, in the zone where the secret meshing of sound and meaning occur, and which once we find, we can never find again until we do.

Listen to Michael O’Loughlin on The Parlour Review
[COMING SOON]

Beautiful – went to Mother Of Divine Grace meself ( don’t our schools have ridiculous names!) we had a Kerry teacher who loved verse too. She was the first person I saw who could be put into a trance by poetry. I thought the fairies must’ve gotten to her!