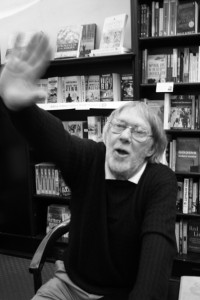 Did I ever tell you about the time, when I was two going on three, I fell out of my crib, in this case a plywood tea chest, and banged my head against the concrete floor? Everyone agreed there was no harm done, but if you have doubts about me or my writing I would refer you back to that wallop I got. Since then, I have always been on the lookout for surprises, some of which have been pleasant.

I’m older now. When Kevin Barry (he of There Are Little Kingdoms) launched my Life in the Universe in Waterstones not long ago, he said I was 107. This is an exaggeration. Twenty-six would be more like it. You know what I mean: the verve, the optimism, the ongoing lack of experience and sagacity. That’s how I feel so long as I don’t look in the mirror. That’s how I’ve felt for forty-eight years, and I intend to stay as I am until, inevitably, there comes the big surprise.

I grew up not realising how miserable the De Valera years were. I spent more time picking potatoes and footing turf even than Seamus Heaney, but never got half the credit. I had a pulse beat of forty back then, and still believe I could have made Ronnie Delany work harder for that medal in Melbourne. I loved football more than anything except, maybe, God, and won junior medals in two odd places for a Longfordian: Tyrone and Chicago. What deprived me of greater athletic renown, I am convinced, was being in the seminary during those crucial years. That or a lack of ability.

I studied in such diverse seats of learning as the Universities of Southern California and Louvain, second oldest university on earth. I studied other places too; you’d think all this education would have done me more good.

I wrote ever since I learned to write. It’s daunting to think of all those words and thoughts floating loose in the universe, scattered, ignored for the most part, turning up in odd surprises, amusing or embarrassing, but never adding up to a life or an opus, least of all a bestseller or a household name. If you want to know the low-down about me and my work, you’d have more luck reading that vast body of verbiage most of which was never published, not yet.

The following is some of the unpublished stuff I wrote for a book that, if published, I would have called The K Conundrum (it’s a long story, but the K stands for Kierkegaard, another wild and crazy misfit).

The last thing this world needs (I wrote) is another book.

But we humans can’t help scribbling our mane, thecel, phares on nearby walls, from prehistoric cave to inner city to contemporary laptop. We yell or whisper for attention, coaxing the horseman not to pass by. Or, uppity, we wag our finger at the world and admonish it to beauty, truth and goodness, in short to be more like us.

Back in East Galway, not to mention everywhere else, I feel something has gotten into the water or the air or in short the zeitgeist. Life is now full of people and events only one false move away from the incredible. Just give them a second look and they become a story, amazing or moving or scary or funny. Perhaps they were always like that only I didn’t notice. Anyway, the future of Irish writing can’t get along without them. So be good to everyone you meet.

Most of our scribblings disappear when the tide comes in. Some endure, by accident or design, significant either for their profundity or, at least, their longevity. The best of what survives is eventually called literature and becomes the echo we hear when we try to make sense of the world: authors brandishing well-worn words from far away and telling us we don’t need to reinvent everything because they have been down this road before us and left footprints.

On good days we pass a passing remark, obiter dicta as the Romans called them, such as “I have a dream” or “Let them eat cake,” and the ramifications take off in every direction. Piled high enough, all this adds up to our heritage.

We’re going down this road only once, so people say. We’d be fools not to make it the best damn journey ever. That’s the logic. In reality, though, we are woefully sloppy with our opportunities. Socrates’ warning that the unexamined life is not worth living is a wake-up call most of us hear too late. We obey clock and calendar, close out the year, start a new one, buy spring clothes, summer clothes, fall, winter. We stop running, slow down. It’s too early to retire, then too late to matter. The years that crawled in our youth got impatient and started galloping in later life. The beating of our hearts is the drumbeat calling us down a road whose destination we scarcely stopped to think about.

What’s the best way to spend this one life? We rage and rave, as R. D. Laing wrote in a sonnet, “to make our present offering to the sun, before our time, too long, too short, is done.” If we’re raging and raving, we’re still at least alive, kicking up dust, and maybe still feisty enough to pee into the wind. Some of us are sleepwalking. Or confused. Or incapacitated. Or dead. It’s hard to generalize. Yet we can often generalize and hit some nail on the head. We’re all called people because basically we’re alike.

I feel this particular life is far from over. Patrick Kavanagh describes his childhood in a poem, and the train puffing past blowing smoke and intimations from faraway places. At that moment the children “knew that we could never die till something happened.” That’s a feeling I have. There is yet something more to happen before I go. That is, something significant. Which then begs the question of what is significant.

It’s hard to know when all the things have finally happened. I’ve had a good share. I was for twenty years an editor for a newspaper with readership in ninety-six countries. Once in a blue moon an echo comes back, something someone liked, but an equal number surely thought the stuff malarkey, it’s daunting. And I meddled in books. My unpronounceable novel, Papabile, won an award as the best book written by anyone from Kansas City for 1998. But were such trivia the whole caboodle and is that all there is? Did I miss something back there? Omit something? Maybe a big thing? And if I did, is it still waiting for me down this road I’m on, or keeping itself fresh for me like good girls used to do for their husbands (though not, it seems, vice versa)? There were off-ramps I took, others not taken, and I, who know myself better than anyone I know, cannot be sure if (watch me mix those metaphors) I’m singing the song I would sing if I knew a few more notes. Oh, and for the record, I’m tone deaf and that’s a fact.

Since retiring, if that’s what it is, to East Galway in 2003, I’m going through a creative and almost happy spell. There is life after whatever age I was when I came to East Galway, namely twenty-six. Great good things have happened. I came across The Stinging Fly, in the person of Declan Meade. He took a chance and published by Life in the Universe. The quote I quote most often when art comes up is from Ned Rorem, a critic and, I believe, a composer in New York, to wit: Art is to dare, and to have been right. It’s an odd construction but one gets his drift. I myself may have dared more often than I have been right, but you need the two.

Back in East Galway, not to mention everywhere else, I feel something has gotten into the water or the air or in short the zeitgeist. Life is now full of people and events only one false move away from the incredible. Just give them a second look and they become a story, amazing or moving or scary or funny. Perhaps they were always like that only I didn’t notice. Anyway, the future of Irish writing can’t get along without them. So be good to everyone you meet.

And did I mention that in June I had another book published? Forty years ago, I edited an annual literary review, first called Everyman and then Aquarius. The Liffey Press has just published Creative Commotion: The Everyman/Aquarius Anthology, 1968-1974. It’s full of contributions from the immortals and others, from Brian Friel and Tyrone Guthrie and Seamus Heaney to—well, I can’t say you’re not in it until I know who you are.

Listen to Michael J. Farrell on The Parlour Review