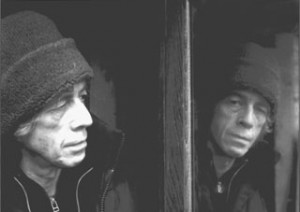 As energising and confrontational as the music it examined, Shell Shock Rock (1978), John T Davis’ first major film looked at the burgeoning northern punk music scene and introduced us to a documentary filmmaker unafraid to challenge the conventions of the genre.

Born in Belfast in 1947, Davis’s first experience of filmmaking came via a chance encounter with DA Pennebaker. In 1966 the legendary filmmaker was on a Belfast street, camera on shoulder, recording Bob Dylan for the seminal documentary Don’t Look Back, when a young Davis happened on the scene.

Instantly he knew that filmmaking ‘was such a cool thing to do. It was rock ‘n’ roll and it was for me’. However, unsure how to pursue his ambition Davis went off to study at art college.

After completing his studies at the Belfast College of Art, he half-heartedly considered a career as an art teacher. However, the death of his Uncle Jack in 1974 was to have a profound and lasting effect on his life.

Davis’ relative left his house, Ben Edar, in a trust for the young man but more importantly, also left an old 8mm camera. The camera drifted into Davis’ hands and gave him the means by which he could start to shoot his films and develop his vision.

Following the early trilogy of Shell Shock Rock, Protex Hurrah and Self-Conscious Over You in which he captured the attitude of northern punk exponents like Stiff Little Fingers, The Undertones and The Outcasts, Davis began to focus on what was to be a recurring theme of his work, American culture and sub-cultures.

His work was also increasingly innovative as evidenced by the experimental Route 66 (1985). Bringing the viewer on a bizarre celluloid trip, Route 66 ‘exposed the lie of the American Dream’, the lens of Davis’ camera the instrument by which he unflinchingly documents the beauty and ugliness of American life in all its guises.

His experiences in America’s ‘Bible-Belt’ were to resonate in his encounters with fundamentalist religion in Northern Ireland with the films Dust On The Bible (1989) and Power In The Blood (1989).

Following country and western preacher Vernon Oxford (the self-proclaimed ‘love ambassador’ from Nashville, Tennessee) as he tries to bring Jesus Christ back to the people of Northern Ireland, Power In The Blood uses the figure of the outsider, as represented by the zealous missionary Oxford, to examine Northern Ireland from a new perspective.

Power In The Blood draws the viewers’ attention to the unsettling parallels between the redneck mentality of America’s deep south and attitudes displayed by religious fundamentalists in Northern Ireland.

In 1991, Davis made Hobo, generally considered to be his finest work. Certainly his most famous film, Hobo follows the exploits Beargrease – the hobo of the title – as he criss-crosses America, stowing away on freight trains and foraging for food in dump trucks.

Hobo is by turns tragic, farcical and downright bizarre. Davis first meets his subject at a hobo convention. Apparently, although America’s vagabonds refuse to be constrained by the structures of established society, they are more than happy to have formalised meetings.

For Davis the experience of making Hobo was not to be that of a mere spectator, passively recording the hardships of his subject’s life. For his film to display the veracity he desired would require the understanding that could only be attained by direct experience.

So for the duration of filming Davis too led the life of the hobo, jumping trains and scavenging for food. Parallels have been drawn between Davis’ work on Hobo and the earlier Route 66 and the American Beat movement’s obsession with the transitory life, with life lived on the road. However, what Davis shows us is that the Beat dream soured. He removes all the gloss and through the story of Beargrease, shows us the true price to be paid in attaining a life of ‘freedom’.

The Uncle Jack (1996) is Davis’ most autobiographical work to date. It is the fascinating story of Jack McBride Neill, the Ulster cinema architect who in the 1930s and 1940s was to design some 16 cinemas in Northern Ireland. McBride Neill was also Davis’s Uncle Jack and the man who was to rouse his passion for the art of film-making.

The Uncle Jack is much more than mere documentary. A touching portrait of and tribute to McBride Neill, the film also reveals much regarding Davis’s own life and is a meditation on the creative act. Building cinemas or making films involves the same process and requires people of an obsessive and passionate personality, people like McBride Neill, people like Davis.

During the making of The Uncle Jack one of the celebrated architect’s most beautiful buildings, Bangor’s Tonic Cinema, was to be destroyed in a blaze. In 1999 by a cruel and ironic twist of fate, Ben Edar, the house which McBride Neill had bequeathed to Davis, was also ravaged in a fire.

Although the house was rebuilt to stand proud once again on the shores of Belfast Lough some things proved irreplaceable. Ben Edar was also the home to Davis’s entire film archive, a repository for three decade’s work including the out-takes from all his films.

Little of the footage was saved. Davis spent the next two years concentrating on rebuilding his home and saving what he could from the carpet of ashes and celluloid that was left in the aftermath of the blaze.

Through his exploration of the very different and conversely very similar worlds of his subjects he reveals something of the human condition. It will be interesting to see where this most singular and idiosyncratic of film-makers takes us next.

Thanks to Culture Northern Ireland.org