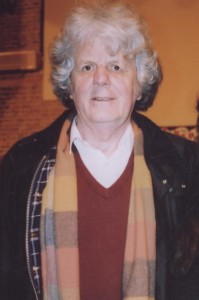 ‘In the eighteenth century Blake wrote two books – he wrote one called America, A Prophesy and the other called Europe A Prophesy, and this was in French revolutionary times when people were redesigning humanity, redesigning their world completely you know… and so he was trying to re-shape, reform, re-think, re-invent humanity in those books so that humanity would be available to spirit and I thought now in high capitalist times, maybe it’s time to write a similar kind of book, so I wrote a book about Ireland called Invoking Ireland and then I wrote a book called ‘Night Journey to Buddh Gaia’ which is… (pause) … invoking Ireland could be called Ireland A Prophesy. Prophesy now not in the sense of predicting the future but prophesy in the sense of trying to get at the soul. What are the fundamental intuitions by which a people live what are the best and most fundamental by which we the Irish can live and then I’ve written this other book ‘Night Journey to Buddh Gaia’ and that’s doing the same thing to Europe what are the most fundamental intuitions and visions and hopes by which we Europeans can live so it’s prophesy in that sense do you know.

John on being asked if his new book, NIGHT JOURNEY, is a continuation of themes from his earlier work.

‘Yeah, I mean In a sense I’ve been writing the same book for the last fifty years but under different titles but everything I’ve written is really concerned with the same number of themes like, do you know, how to inhabit our humanity given the enormity of what we humanly are. What kind of politics and what kind of history could we design for ourselves given the enormity of who we are and given the difficulty of being human’?

‘I wondered does Ireland have a dreamtime, does Europe have a dreamtime and when I thought about it I said yes we have a dreamtime of stories of great old myths, legends, great sayings like, and I wanted to find out what they were, do you know, so I put them together in a book called Dreamtime. And the idea was….John Hume has said let us draw a line under recent Irish history, I think that’s calamity and disaster, what we must do it seems to me, we all know that Irelands history has been a very troubled history, it’s been one invasion after another, one battle after another battle and it has been a desperately troubled history and continues to be troubled in some way and there are still divisions among the people of Ireland right now.

‘It isn’t in the Battle of the Boyne that we will solve our problems. It isn’t in 1916 in Dublin that we’ll solve our problems like, we have to go down into our dreaming, we have to go down and reassemble and re-imagine the fundamental intuitions and by which we have been a people in these old stories and by which we can again be a people. That’s how I would promote Irish Unity.

‘First it was Copernicus, like then it was Darwin and the rest of them, do you know and suddenly like we have fallen out with their Christian story so right now we are storyless we have no great story to live in. A great story to live in and give us a sense of ourselves and that to me is calamitous. That to me explains the sheer nervousness of the modern world and our sense of alienation in the world and our crowding into cities where we seem to shelter in each others noise.

We are now AIDS virus of the Earth, we are doing to the Earth what the AIDS virus does to the body, we are breaking down its immune system in the way that you would say of a human being that he/she is HIV positive, the Earth is now HSS.

His desire ‘to bring stories forward in a new way’ ‘Re-devise these stories so that now they can make sense to us all over again.

‘We are now AIDS virus of the Earth, we are doing to the Earth what the AIDS virus does to the body, we are breaking down its immune system in the way that you would say of a human being that he/she is HIV positive, the Earth is now HSS. Homo Sapien, sapiens positive with the Earth, with us, and it can’t go on so we have to in some way make a break with the past. And be new and be different and be otherwise in the world than we have been.

On his ‘immensely, wonderfully, tremendously physical childhood, like out every day in the wind, the wet and the rain no matter what like’

On books that have stayed with him throughout his life.

‘The book that shocked me into other books was of course Darwin’s ‘The Origin of the Species’ like… I read that and I was man overboard, I’d grown up in a particular story and that book shocked me out of my story and I was houseless and homeless in a way but so that set me on a quest then I came upon other books and at eighteen I came across Macbeth and that stayed with me, stayed with me, stayed with me, both as a student and as a teacher. I tried to release the depths, depths within it as a teacher in Manitoba but yeah there have been books the old, Emily Bronte, Wuthering Heights the typical kind of books but it was mostly the great Classics that have stayed with me, Dostoevsky’s novel, in that sense I’m kind of boring , the Great paintings that have stayed with me have been by Leonardo and Raphael like… and the great music of Mozart and Beethoven, the great Irish airs of course as well, in that sense I suppose I’m a bit boring , what is deemed to be the great stuff in both literature and art and dance or whatever that has stayed with me, I don’t know what that’s saying maybe there are great books independent of my response to them.

‘At twenty three I kind of needed a book like… that would walk me through life and I didn’t find it do d’you know…. The idea of the Vade Mecum. I will go with thee, everyone I will go with thee to be guide, and I must need to go by their side. I needed a book that would help me to name my humanity to me and I didn’t find that book and I’ve spent the last fifty years trying to write that book myself. I had to write the book that I didn’t find at twenty three and I was lonely at twenty one, twenty two and twenty three because I stood there unnamed by my culture, do you know what I mean , unapprehended in some way by my culture, I didn’t have a vocabulary that my culture gave me…so I had to go abroad to all the other cultures, I had to go away from the European novel, I had to go away from European axioms and assumptions like, to properly name me, to fully name me so I went among the Australian Aborigines, Hindus, Buddhists, Daoists…..like I went on a Pantheistic walkabout if you like seeking for myths and metaphors that would name me so I didn’t find what I needed in books but in the end I had to sit down and write the book I needed at twenty three and I think I’ve just about written it now at 68.

Biographical note
John Moriarty was born in north Kerry in 1938 and educated at Listowel and University College Dublin. He taught English Literature at the University of Manitoba in Canada for six years, returning to Ireland in 1971. In June 2006 he received an honorary D.Litt. from the National University of Ireland. He is the author of Dreamtime (1994, revised 1999), the trilogy Turtle Was Gone a Long Time: Crossing the Kedron (1996), Horsehead Nebula Neighing (1997) and Anaconda Canoe (1998), Nostos, an autobiography (2001) Invoking Ireland (2005, revised 2006), Night Journey to Buddh Gaia (2006) and Serious Sounds (2007).

On the 23 June 2006 John was conferred with the degree of Doctor of Literature, Honoris Causa by the National University of Ireland, Galway. Click here [93kb, .pdf] for the address by the Pro-Vice-Chancellor and President of NUI Galway.

John had been working on establishing a Christian Monastic Hedge School for the last number of years which he called Slí na Fírinne. Click here for more information. He died in 2007.

Listen to John Moriarty on The Parlour Review


One Response to John Moriarty

Oh Marion! This interview struck me. His lifelong exploration of the human condition, the attempt to ‘name his humanity’ is inspiring. May we all be so curious.