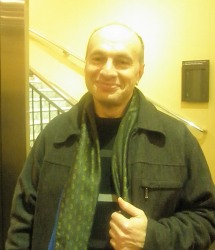 Anatoly was born in Moscow on Chekhov Street. That’s why his father, a great fan of Anton Chekhov, always called his son Anthony, but his mother kept calling him Anatoly; the subject his parents never agreed on. Anyway, he feels comfortable using either name or both.

Anatoly was born in Russia; however his father, Jerzy Kudryavitsky, was a Polish navy officer who served in the Russian fleet based in the Far East. Being the captain of a small warship protecting the Russian marine border in late 1930s, Jerzy Kudryavitsky often had to keep intruding Japanese fishermen in temporal captivity, and used his extensive knowledge of languages to communicate with them. This is how he developed a strong affinity with Japanese culture. Anatoly seems to have inherited his interests, and now writes haiku in English and edits an international haiku magazine called Shamrock.

His haiku, many of which have won international haiku awards, were published in the main English-language haiku magazines and translated into seven languages. He is the current Chairman of the Irish Haiku Society

As for his Irish connection, Anatoly’s mother, Nelly Kitterick, was the daughter of an Irishman from Westport, Co. Mayo, who spent thirteen years in Stalin’s GULAG. She and her sister Isabel worked as teachers of music. Isabel Kitterick, also a musicologist, published a critically acclaimed book titled Chopin’s Lyrical Diary. Anatoly’s own musical pursuits didn’t end when he gave up his career as a violinist in his late teens. He later reviewed concerts of classical music in newspapers, and now can still pick up his fiddle when not too many people are around, or break the silence in a different way by playing Tibetan singing bowls and bells.

As for his Irish connection, Anatoly’s mother, Nelly Kitterick, was the daughter of an Irishman from Westport, Co. Mayo, who spent thirteen years in Stalin’s GULAG. She and her sister Isabel worked as teachers of music. Isabel Kitterick, also a musicologist, published a critically acclaimed book titled Chopin’s Lyrical Diary.

Anatoly comes from a family of teachers and, as he often says, despite all his attempts to avoid an academic career it sometimes catches up with him. Since February 2006 he has been giving classes in creative writing to members of Ireland’s minority language communities. Unfortunately, this project hosted by the Irish Writers Centre was terminated in July 2008 but Anatoly can foresee the appearance of another organisation interested in giving migrants an introduction to Irish culture.

The duality of Anatoly’s nature shows only too often. He prefers to write fiction in Russian but he has never written a single haiku in this language considering English far more suitable for this purpose. His novel titled “The Case-Book of Inspector Soaps” (written in Russian and set in London) has been published in Moscow by Zakharov Press just before Christmas 2008. Anatoly has also authored seven collections of Russian poems and two books of English poems: Shadow of Time published in 2005 by Goldsmith Press and Morning at Mount Ring (Doghouse Books) which appeared in 2007. His anthology of contemporary Russian poetry in English translation titled A Night in the Nabokov Hotel was published by Dedalus Press in 2007; for this book he translated works by twenty poets. He also translates the other way round, and his Russian-language versions of the work of nearly twenty-five Irish poets have appeared in literary magazines and anthologies.

Anatoly lives on the South side of Dublin, and can see the sea out his window, especially when the weather is fine. He has a daughter based in Germany who also writes haiku and won Honorary Mantion in the World Haiku Association Junior Haiku Contest 2007.

Anatoly Kudryavitsky on The Parlour Review